Greeting the Flowers with Grace: Traditions of Love and Acceptance

Every life is its own journey, but when examined within the context of history, even the smallest, seemingly intimate traditions can take on greater meaning. Meet my grandmother, Grace – who taught me that in a world of fences, the most beautiful places are filled with color.

Once upon a time not so long ago, in a land not so far away, there lived a girl named Grace. She was exactly as her name implied. Her movements and speech were sweet as the tea served by her mother. Charming and obedient, Grace preferred hosting parties for her stuffed animals over climbing trees and digging for crawfish like her siblings.

In the afternoons, she would carefully arrange her tiny white china set onto the pristine table cloth, take a moment to smooth the folds of her pinafore, and sit down to enjoy Wonder Bread sandwiches with her teddy bears. Sometimes, Grace’s momma would even give her some milk to share with them – which was much more fun than the water she usually served.

To Grace, nothing completed her outdoor tea parties more than the scent of the magnolias that grew next to the picket fence at the edge of the yard. Each day, the flowers greeted her and she would happily greet them back before going about her social duties.

As time moved forward, the guest list for afternoon tea began to include more people and fewer toys. The menu became more sophisticated, even complicated. Still, Grace pressed forward. Tradition was important to her. She would carefully arrange her pearl white china set onto the pristine table cloth, take a moment to smooth the folds of her pale skirt, and sit down to enjoy whipped potatoes or cauliflower puree with her friends.

Yellow daffodils had started to appear in the space along the picket fence, right next to the magnolia tree. Thinking that the first daffodils to appear were weeds, she plucked them from the ground and tossed them aside.

Time moved forward and tea time occurred less frequently. Grace’s friends were leaving for faraway places like Germany, France, Britain, and Japan. Life became more complicated. Still, Grace pressed forward. Tradition was important to her. The sounds of the Pacific Ocean reminded her of times past, as she carefully arranged her white ceramic plates set onto the table. The folds of her navy blue of her skirt matched the color of her husband’s uniform. “Together” was the treasured moments when they would sit down to eat eggless biscuits with mock cream and drink sweet tea before William’s next deployment.

Bright red poppies could never take the place of the snowy colored magnolias. Picket fences would have to wait for happier times.

Grace pressed forward and happier times soon followed. She and William created new traditions. First came the Sunday afternoon walks after church with their son Billy… then Billy and Jimmy… then Billy, Jimmy, and David… THEN Billy, Jimmy, David, and Doug. Grace’s young children were much more interested in climbing trees than tea parties. Times were changing. The days of Wonder Bread and white china sets seemed a fading memory.

When the daffodils appeared, Grace let them grow alongside the outside of the picket fence. They were pretty enough to look at as long as they weren’t inside the yard. They might be weeds, but they were pretty weeds.

Time moved forward. Grace pressed forward. Life became simple.Tradition was still important to her, but traditions of love and acceptance were the only ones that really mattered now that she had grandbabies. Every holiday, Grace would carefully arrange silvery china onto a pristine table cloth, take a moment to smooth the folds of her tailored slacks, and sit down to enjoy fried chicken, mole poblano, kimchee rice, and tamales with her patchwork family.

To Grace, nothing completed each gathering more than the beautiful bouquet of flowers at the center of the table –  yellow daffodils, white magnolias, firey dahlias, cream colored orchids, and pretty pink hibiscus. 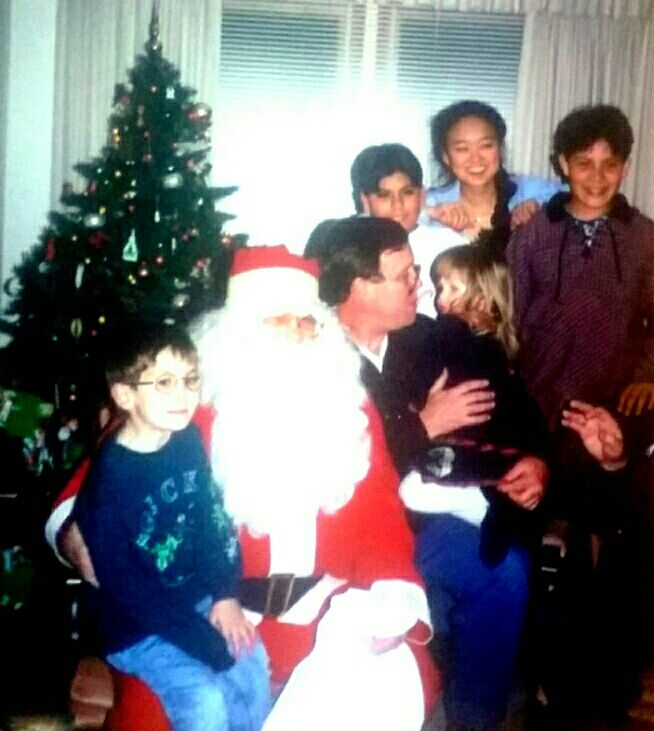 The Bowers Family Bouquet Of Flowers

With every celebration, the flowers greeted her and she would happily greet them back before going about her family duties.

What were Grace’s most important duties, you ask? Giving her granddaughter some milk to share with the teddy bears and tending to the flowers, of course.