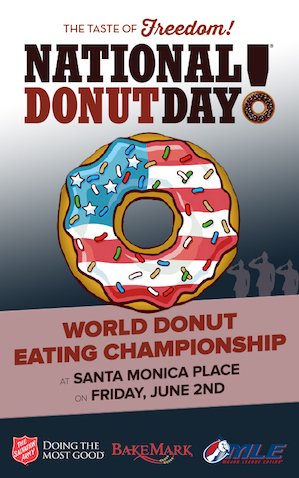 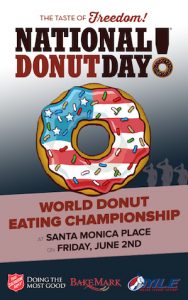 Major League Eating is proud to announce a delicious new addition to our 2017 slate of sanctioned eating Championships. The Salvation Army National Donut Day World Donut Eating Championship is coming to beautiful Santa Monica, CA, this June 2nd. The world is on notice.

The event is a celebration of National Donut Day. This occasion was established in 1938 by the Chicago Salvation Army to raise much-needed funds during the Great Depression, and to honor the work of World War I Salvation Army volunteers who prepared donuts and other foods for thousands of soldiers. It is hard to imagine a United States without donuts but such was the case prior to World War I. The donut as we know it was a battlefield improvisation, crafted by Salvation Army “Lassies,” women imbedded with US troops on the western front who provided crucial support to the war effort. Helmets became deep fryers. Spent artillery shells became dough cutters. Empty wine bottles became rolling pins. And the donut as we know and eat it was born. When US soldiers returned home, they brought with them their love of the donut, and donut shops and bakeries across the land responded to meet demand. Today, food scholars all agree—no Salvation Army, no US donut culture.