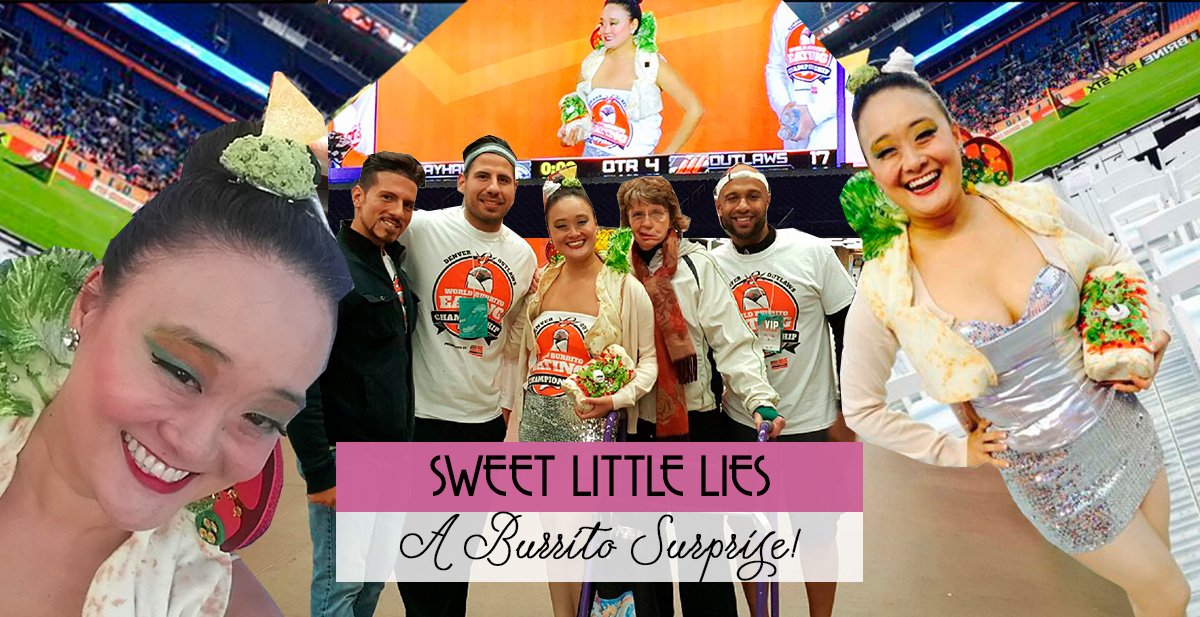 Of all the lessons my parents taught me, one of the most important was to always tell the truth because lies have a way of coming back in unexpected ways. I like to think of myself as especially well-behaved, so I did what any loving child would do. I ignored their advice and did what I wanted anyway.

I lied to my mom.

“Oh what a tangled web we weave, when first we practice to deceive,” or so the saying goes. This was no ordinary adventure. This lie was complex enough that my entire family and a lacrosse team joined me in telling the tangled tale.

My mom is fairly easy to deceive. A survivor of childhood brain cancer, she reminds me of “Dory”, the forgetful fish in “Finding Nemo”. Daily details are often forgotten, but when it comes to the important things (like, “P. Sherman, Wallaby Way”), her memories last forever. It was against this backdrop that I planned to give her the memory of a lifetime.

After several seasons in the competitive eating spotlight, I still find it challenging to reconcile the sport’s exhilarating energy with some of the harsher realities I’ve observed in my travels around the country. When the Denver Outlaws World Burrito Eating Championship (sponsored by Illegal Pete’s) was announced in Denver, Colorado, I was given a unique opportunity to transform trouble into triumph. I never would have expected that the transformation would be my own.

It’s no secret that my relationship with my father was incredibly strained. In the final years of his life, our relationship was non-existent. Dad was depressed and angry as the result of extended illness, but refused to seek help. My mother and I were barely on speaking terms, though we did our best to try and hold our broken family together.

As luck would have it, people and burritos have a lot in common.

Burritos are made of a variety of ingredients and spices. Beans and peppers are as different from one another as rice and carnitas. Yet, when they are wrapped together in a tortilla, seemingly different flavors create something incredible.

The World Burrito Eating Championship was scheduled to take place only a short distance away from my mother’s new home. I was relieved, though I knew she was grieved following Dad’s death. Burritos provided the perfect opportunity to bring her some cheer and open a new chapter.

“I’m coming for a contest and I’d like to surprise my mom”, I told my aunt over the phone. “Can you get her to the stadium?”

“Of course! But how do we get her there without telling her why she’s going?”, my aunt asked.

It was a fair point. After a couple of calls to the Denver Outlaws, my aunt and I had made arrangements for seats to the lacrosse game that preceded the burrito championships. We presented them with our dilemma.

“What if you tell your mom there was a raffle at Sports Authority and she won tickets to the game?”, the sponsors suggested.

I don’t know exactly how the conversation went between my aunt and my mom once we decided to run with the story, but I’m confident my aunt is a Master of Deception. By the time Mom arrived at Sports Authority Stadium, the whole family was in on the surprise.  She was greeted by the Outlaws with a gift bag and a “congratulations!” for winning the raffle.  We were giving her the full show and she was eating it up.

There was one teeny, tiny problem… the JUMBO-TRON!

Throughout the lacrosse game, images of the burrito championship competitors appeared on the enormous screen. “Remember to stay after the game for the Denver Outlaws World Burrito Eating Championship, sponsored by Illegal Petes”, the announcer’s voice would boom across the stadium.

My cousins are miracle workers. One works with zoo animals, another works with small children. They knew how to react quickly and create a diversion. Jumbo-trons are nothing compared to Dumbo(trons) or toddlers. Thanks to their team work and quick thinking, Mom still had no idea what was about to happen.

The lacrosse game concluded with a victory for the home team. It was finally time.

“They say that competitive eating is the battleground upon which God and Lucifer wage war for men’s souls, my friend. And they are right!” The voice of Major League Eating’s Sam Barclay echoed through the stadium.

One by one, each of the competitors took to the field.

A giant image of my face splashed its way across the jumbo-tron. 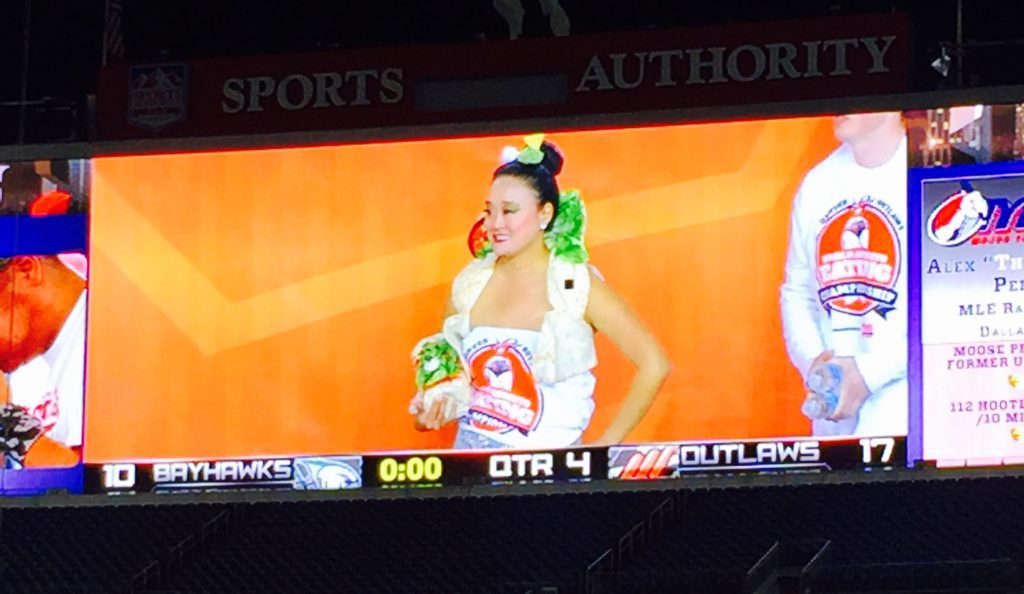 “Mary’s mom just got the surprise of a lifetime”, Sam exclaimed as he handed me the microphone.

“Hi, Momma!” I waved at the camera, handed the microphone back to Sam, and took my place at the table.

I don’t remember how many burritos I ate that night, but I have never felt more full – of life, of love, and hope for the future. As the lights dimmed and the fireworks whispered “goodnight”, I went to find my family in the stands.

A mix of different ingredients and spices, we were wrapped together by a common bond and a fond memory. We were going to be alright.